produced by
POPCult and Tania Pedroni
in collaboration with RAITRE/DOC3

Everybody’s beautiful, slim, in shape. It seems in the world everybody has to look like this. Who of us has never fought with too many kilos and a body that doesn’t like?
Going on a diet is a fatigue that everybody knows. But for someone this is a more difficult, almost impossible challenge. There’s someone, in fact, that is really far from the reigned beauty model, someone who has not just some more kilos, someone really fat, very fat. How is an extra large life in a world that wants you super-thin and in big shape?
The obesity is not diffused only in America where it’s common known there are the extremes and the phenomenon is really visible, but it’s becoming increasingly a sanitary and social emergency even in other western countries (the Italy primarily) that had seemed immune because of their culture and tradition.

The narration has in the centre the stories and people showed in a moment and in a place that unite them and put them together, a point of no return that makes a deep change necessary and with uncertain results.  Obesity has also been an occasion to tell one of the contradictions of our time, that imposes us an aesthetical model of extreme thinness (always more often to the confinements with the anorexia) from a side and from the other it apparently imposes us models of consumption without limits (and without “price”).
For me to tell this story has meant to talk about men and women that are part of a submerged continent: pure consumers of goods that don’t feel any possibility to be protagonists neither in their own life; in this sense a very modern and representative portrait of a diffused condition, but also a way to return dignity and depth to whom had not face, voice, story and destiny. 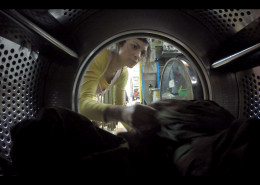